In a solar cell, the parameter most affected by an increase in temperature is the open-circuit voltage. The impact of increasing temperature is shown in the figure below.

The effect of temperature on the IV characteristics of a solar cell.

The open-circuit voltage decreases with temperature because of the temperature dependence of I0. The equation for I0 from one side of a p-n junction is given by;

where:
q is the electronic charge given in the constants page;
A is the area;
D is the diffusivity of the minority carrier given for silicon as a function of doping in the Silicon Material Parameters page;
L is the minority carrier diffusion length;
ND is the doping; and
ni is the intrinsic carrier concentration given for silicon in the Silicon Material Parameters page.

where:
T is the temperature;
h and k are constants given in the constants page;
me and mh are the effective masses of electrons and holes, respectively;
EGO is the bandgap linearly extrapolated to absolute zero; and
B is a constant which is essentially independent of temperature.

Substituting these equations back into the expression for I0, and assuming that the temperature dependencies of the other parameters can be neglected, gives;

where B' is a temperature independent constant. A constant, γ, is used instead of the number 3 to incorporate the possible temperature dependencies of the other material parameters. For silicon solar cells near room temperature, I0 approximately doubles for every 10 °C increase in temperature.

The previous three equations are at a fixed temperature such as 25 °C, but A is defined as constant across all temperature ranges.

In silicon, changes of n_i with temperature are approximated by1:

Substituting ni into the equation for VOC gives:

Differentiating with respect to T gives:

Substituting for A in the equation above and simplifying gives:

The result in the previous equation assumes that changes in VOC with temperature are entirely due to the changes in the intrinsic carrier concentration, ni. In reality, carrier lifetime, diffusivity change etc. also with temperature. The plot below shows the reported change in temperature of photovoltaic modules in the California Electric Commision module database as a function of cell VOC. The result from the change in ni alone is close to the average of the module set. There does not appear to be a systematic departure from the predicted values, indicating the variation is likely experimental error rather than changes in cell technology. The values are also self-reported by module manufacturers. 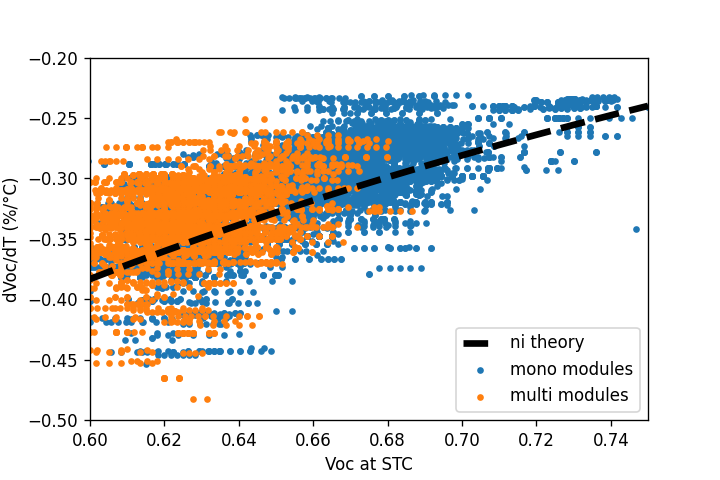 The temperature dependency FF for silicon is approximated by the following equation;

The effect of temperature on the maximum power output, Pm, is;

Most semiconductor modeling is done at 300 K since it is close to room temperature and a convenient number. However, solar cells are typically measured almost 2 degrees lower at 25 °C (298.15 K). In most cases, the difference is insignificant (only 4 mV of Voc), and both are referred to as room temperature. Occasionally, the modeled results need to be adjusted to correlate with the measured results. 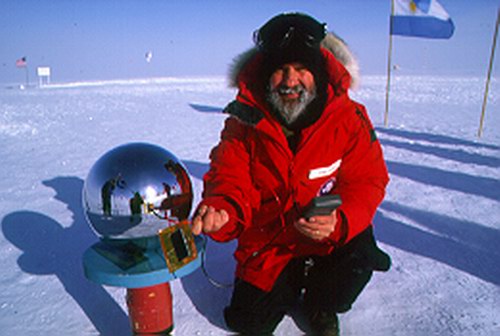