Even though the CZ process is commonly used for commercial substrates, it has several disadvantages for high efficiency laboratory or niche market solar cells. CZ wafers contain a large amount of oxygen in the silicon wafer. Oxygen impurities reduce the minority carrier lifetime in the solar cell, thus reducing the voltage, current and efficiency. In addition, the oxygen and complexes of the oxygen with other elements may become active at higher temperatures, making the wafers sensitive to high temperature processing. To overcome these problems, Float Zone (FZ) wafers may be used1. In this process, a molten region is slowly passed along a rod or bar of silicon. Impurities in the molten region tend to stay in the molten region rather than be incorporated into the solidified region, thus allowing a very pure single crystal region to be left after the molten region has passed. Due to the difficulty in growing large diameter ingots and the often higher cost, FZ wafers are typically only used for laboratory cells and are less common in commercial production.2 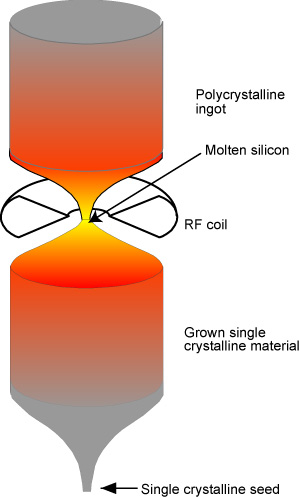