Cutting silicon into wafers leaves the surface covered with cutting slurry and the surface is damaged due to the action of the saw. Wafers are cleaned in a hot solution of sodium hydroxide that removes the surface contamination and the first 10 µm of damaged silicon. The wafers are then textured in a more dilute solution of sodium hydroxide with isopropanol as a wetting agent. For multicrystalline wafers, acidic texturing is often used as it gives a more uniform etch rate across gain boundaries. 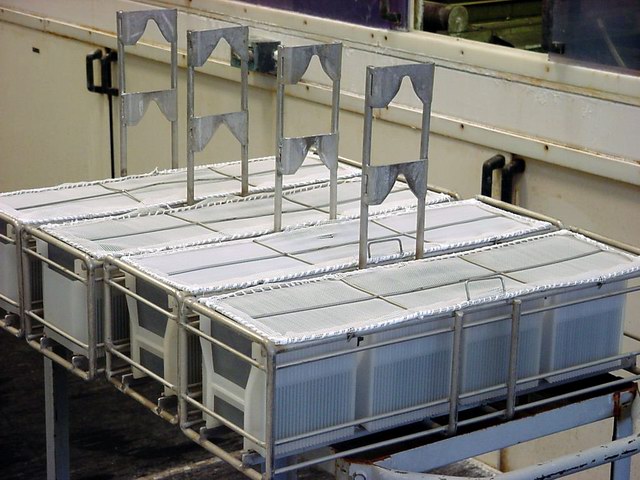 The cassettes are further loaded into holders for moving through the production line. During the texturing process hydrogen is released and bubbles adhere to the wafer. The mesh place on top of the cassettes stops the wafers from floating out of the cassettes.

Wafers during the texturing process. Normally there is a protective blind in place to prevent sodium hydroxide splashes.

The protective blind rolls back and the wafers are removed from the texturing bath. Wafers are put through several rinse cycles and an acid rinse to neutralise the sodium hydroxide.

Finally the wafers are loaded into a centrifuge for a final rinse and spin dry.