Solar energy in one form or another is the source of nearly all energy on the earth. Humans, like all other animals and plants, rely on the sun for warmth and food. However, people also harness the sun's energy in many other different ways. For example, fossil fuels, plant matter from a past geological age, is used for transportation and electricity generation and is essentially just stored solar energy from millions of years ago. Similarly, biomass converts the sun's energy into a fuel, which can then be used for heat, transport or electricity. Wind energy, used for hundred of years to provide mechanical energy or for transportation, uses air currents that are created by solar heated air and the rotation of the earth. Today wind turbines convert wind power into electricity as well as its traditional uses. Even hydroelectricity is derived from the sun. Hydropower depends on the evaporation of water by the sun, and its subsequent return to the Earth as rain to provide water in dams. Photovoltaics (often abbreviated as PV) is a simple and elegant method of harnessing the sun's energy. PV devices (solar cells) are unique in that they directly convert the incident solar radiation into electricity, with no noise, pollution or moving parts, making them robust, reliable and long lasting. Solar cells are based on the same principles and materials behind the communications and computer revolutions, and this PV Education site covers the operation, use and applications of photovoltaic devices and systems. 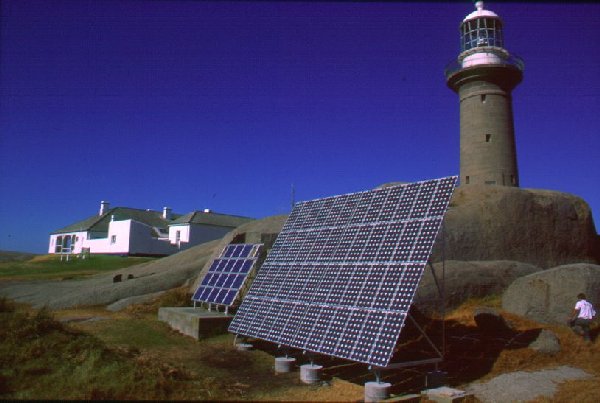 Solar powered light house at Montague Island, a National Parks and Wildlife sanctuary on the East coast of Australia. The small panel on the left powers the light house. The large panel on the right powers the cottages which can partially be seen in the background. The cottages contain facilities for the National Parks' caretaker and facilities for researchers on the island.