The ideal diode equation is one of the most basic equations in semiconductors and working through the derivation provides a solid background to the understanding of many semiconductors such as photovoltaic devices. The objective of this section is to take the concepts introduced earlier in this chapter and mathematically derive the current-voltage characteristics seen externally. The operation of actual solar cells is typically treated as a modification to the basic ideal diode equation described here.

The derivation of the ideal diode equation is covered in many textbooks. The treatment here is particularly applicable to photovoltaics and uses the concepts introduced earlier in this chapter. For simplicity we also assume that one-dimensional derivation but the concepts can be extended to two and three-dimensional notation and devices.

The objective is to determine the current as a function of voltage and the basic steps are:

At the end of the section there are worked examples.

Semiconductors are analyzed under three conditions: 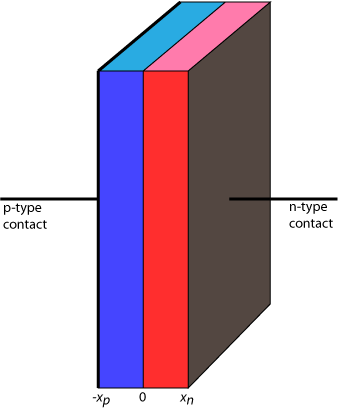