Single crystalline substrates are typically differentiated by the process by which they are made. Historically, Czochralski (Cz)1 wafers have been the most commonly used type of silicon wafer. They are used by both the solar and integrated circuit industry. The process of making a large single crystalline silicon ingot by the Czochralski process is shown below. The use of quartz crucibles in the manufacture of Cz substrates causes the incorporation of ppm  (1018 cm-3) oxygen into the silicon ingot. The oxygen itself is relatively benign but creates complexes with boron doping that degrades the carrier lifetime.2,3 N-type ingots fabricated with phosphorus dopants have similar oxygen concentrations but do not show the degradation effect nor do wafers with lower resistivity or gallium dopants. 4 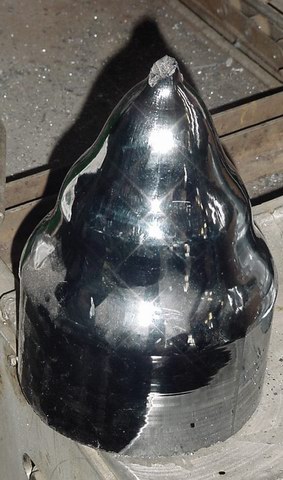 Top of Czochralski ingot. The bottom cylindrical section has been cut off to make wafers. Such "tops and tails" left over from growing the semiconductor industry were originally a large source of silicon supply for the photovoltaics industry. However, when the usage of silicon for the photovoltaic industry surpassed the usage of silicon for the microelectronics industry, the "tops and tails" could no longer provide adequate supply.