Human activities are increasingly releasing "anthropogenic gases" into the atmosphere, which absorb in the 7-13 µm wavelength range, particularly carbon dioxide, methane, ozone, nitrous oxides and chlorofluorocarbons (CFC's). These gases prevent the normal escape of energy and potentially will lead to an increase in terrestrial temperature. Present evidence suggests "effective" CO2 levels will double by 2030, causing global warming of 1~4°C. This would lead to changes in wind patterns and rainfall and as a result may cause the interior of continents to dry out and cause the Earth's oceans to rise. Further increases in the release of anthropogenic gases would, of course, cause more severe effects.

Correlation of the rise in atmospheric carbon dioxide concentration (blue line) with the rise in average temperature (red line)1.

The graph above only goes to the mid-90s since that was the time we started writing the PVCDROM. At the time there was considerable discussion about whether the warming was a trend or a statistical fluctuation. There was some hope that the average temperatures would go  down again to the level of the statistical average. In the intervening years the temperature of the earth has continued to rise as shown in the graph below: 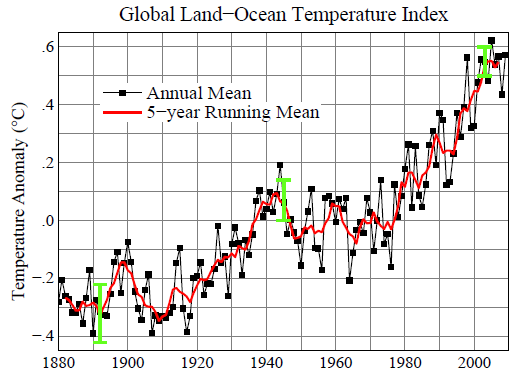 Average surface temperature of the earth. Temperatures are continuing their upward rise.NASA20102

Clearly, human activities have now reached a scale where they are impacting on the planet's environment and its attractiveness to humans. The side-effects could be devastating and technologies with low environmental impact and no "greenhouse gas" emissions are likely to be of increasing importance over the coming decades. Since the energy sector is the major producer of "greenhouse gases" via the combustion of fossil fuels, technologies such as photovoltaics, which can substitute for fossil fuels, must increasingly be used 3.