The majority of silicon solar cells are fabricated from silicon wafers, which may be either single-crystalline or multi-crystalline. Single-crystalline wafers typically have better material parameters but are also more expensive. Crystalline silicon has an ordered crystal structure, with each atom ideally lying in a pre-determined position. Crystalline silicon exhibits predictable and uniform behaviour but because of the careful and slow manufacturing processes required, it is also the most expensive type of silicon. 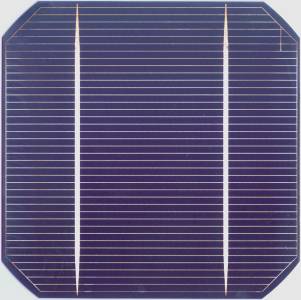 Single crystalline silicon is usually grown as a large cylindrical ingot producing circular or semi-square solar cells. The semi-square cell started out circular but has had the edges cut off so that a number of cells can be more efficiently packed into a rectangular module.

In single crystalline silicon material the crystal orientation is defined by Miller indices. A particular crystal plane is noted using parenthesis such as (100). Silicon has a cubic symmetrical cubic structure and so (100), (010) etc are equivalent planes and collectively referred to using braces {100}. Similarly, the crystal directions are defined using square brackets, e.g. [100] and referred collectively using triangular brackets, <100>.

In solar cells the preferred orientation is <100> as this can be easily textured to produce pyramids that reduce the surface reflectivity. However, some crystal growth processes such as dendritic web <111> produce material with other orientations.

To denote the crystal directions, single crystal wafers often have flats to denote the orientation of the wafer and the doping. The most common standard is the SEMI standard: