IV curve of a solar cell showing the open-circuit voltage.

An equation for Voc is found by setting the net current equal to zero in the solar cell equation to give:

A casual inspection of the above equation might indicate that VOC goes up linearly with temperature. However, this is not the case as I0 increases rapidly with temperature primarily due to changes in the intrinsic carrier concentration ni. The effect of temperature is complicated and varies with cell technology. See the page “Effect of Temperature” for more details

VOC decreases with temperature. If temperature changes, I0 also changes.

The VOC can also be determined from the carrier concentration 2:

Voc as a Function of Bandgap, EG

Where the short-circuit current (ISC) decreases with increasing bandgap, the open-circuit voltage increases as the band gap increases. In an ideal device the VOC is limited by radiative recombination and the analysis uses the principle of detailed balance to determine the minimum possible value for J0.

The minimum value of the diode saturation current is given by 3:

Evaluating the integral in the above equation is quite complex. The graph below uses the method outlined in 4 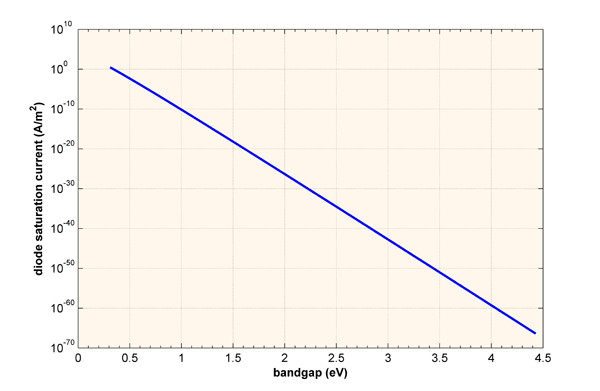 Diode saturation current as a function of band gap. The values are determined from detailed balance and place a limit on the open circuit voltage of a solar cell.

The J0 calculated above can be directly plugged into the standard solar cell equation given at the top of the page to determine the VOC so long as the voltage is less than the band gap, as is the case under one sun illumination. 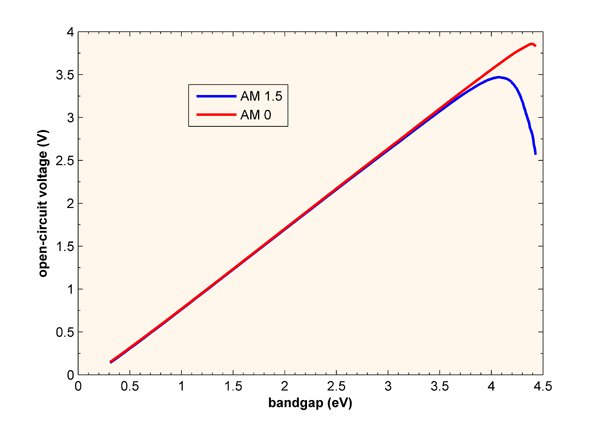 VOC as function of bandgap for a cell with AM 0 and AM 1.5. The VOC increases with bandgap as the recombination current falls. There is drop off in VOC at very high band gaps due to the very low ISC.