An additional valuable source of solar radiation data is the determination of solar radiation from satellite images. These images provide information about the level of cloud cover in a particular region. Information in relation to cloud cover levels is used to provide estimates of the solar insolation at a specific location. While such cloud cover data represents an important resource to determine the radiation at a broader level, this data is not presently generally used in detailed system design for a specific location.

Isoflux contours based on cloud cover data and presented by courtesy of Solarex. The units on the map are in kWh/m2/day and represent the minimum case values at a module tilt angle equal to the latitude. Click on the image for a much larger version. 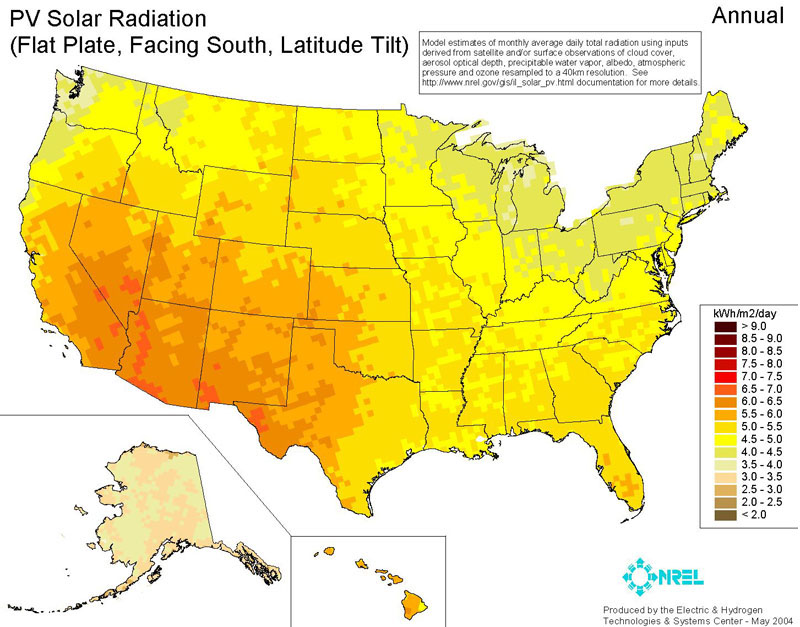 The solar insolation for a module at tilt equal to the latitude. The map is essentially the same as the one above but has been updated with more detail. The data in this graph is used to calculate the output of a flat plate module without tracking.

Solar insolation available to a two dimension tracking module with concentration. Such systems only respond to direct normal insolation (DNI) but receive a higher irradiance in sunny locations due to tracking. A concentrator tracking system with the same efficiency as a flat plate module would produce more energy over the year in the southwest but less energy in the north east and Florida. However, concentrators typically have a higher efficiency than flat plate. The best concentrator modules approach 30% efficiency while the best flat plate modules approach 20%. 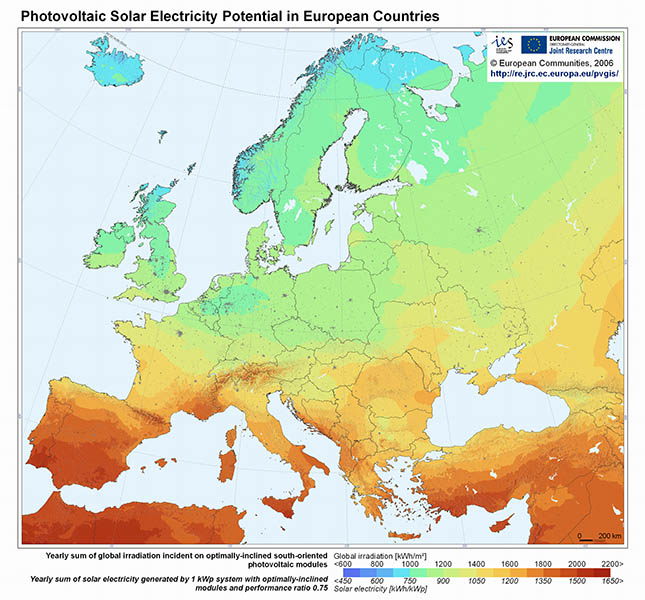 The presented here for Europe uses a slightly different scale of the total irradiance over the year. To convert to the daily average used in the NREL plots, divide by 365 so that the  global irradiance scale on the graph goes from 1.6 kWh/m2/day (dark blue) to 6  kWh/m2/day (dark red). More information on the solar irradiance in Europe is found at: http://sunbird.jrc.it/pvgis/