Detailed balance provides a technique to calculate the maximum efficiency of photovoltaic devices. Originally the method was proposed by Shockley and Queisser in 1961 1. An extended version was published in 1984 by Tiedje et al. 2.

Detailed balance in its simplest and most common implementation makes several fundamental assumptions:

The calculations for detailed balance calculations involve calculating the particle flux for different configurations of the Plank’s equation. The general form of the equation is:

Schematic representation of approximations used in detailed balance. On the left image light is collected from the entire hemisphere which corresponds to maximum concentration. For lower or no concentration the Sun can be seen as an arc giving lower particle flux.

The absorption from the sun is given by:

And the absorption from the black body radiation of the earth is:

The total absorption of the solar cell is:

Calculation of efficiency for a fixed Eg and black body

The efficiency is then defined as:

Efficiency as a function of band gap

To find the efficiency as a function of band gap, the above procedure is repeated for each band gap. There is an range of bandgaps for the optimum cell efficiency as shown in the graph below. 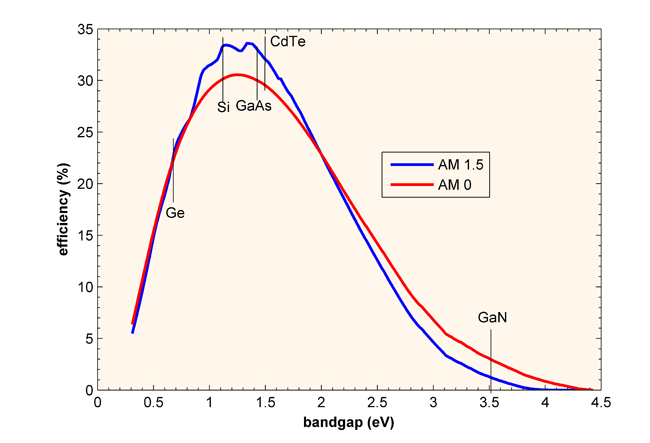 Limiting solar cell efficiency as a function of the material bandgap for one-sun illumination. The calculations assume that the only recombination is radiative. In actual devices the efficiencies are lower due to other recombination mechanisms and losses in parasitic resistances.