Mismatch for Cells Connected in series

For two cells connected in series, the current through the two cells is the same. The total voltage produced is the sum of the individual cell voltages. Since the current must be the same, a mismatch in current means that the total current from the configuration is equal to the lowest current.

A mismatch in the open-circuit voltage of series-connected cells is a relatively benign form of mismatch. As shown in the animation below, at short-circuit current, the overall current from the PV module is unaffected. At the maximum power point, the overall power is reduced because the poor cell is generating less power. As the two cells are connected in series, the current through the two solar cells is the same, and the overall voltage is found by adding the two voltages at a particular current. 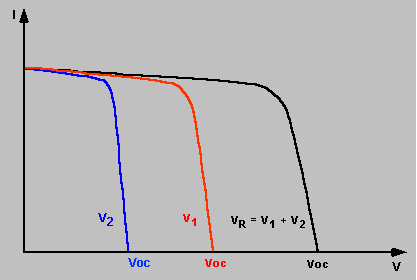 In the animation, cell 2 has a lower output voltage than cell 1.

Overall, in a series connected configuration with current mismatch, severe power reductions are experienced if the poor cell produces less current than the maximum power current of the good cells and also if the combination is operated at short circuit or low voltages, the high power dissipation in the poor cell can cause irreversible damage to the module. These effects are illustrated in the two animations below.

Current mismatch for two cells in series can be quite serious and quite common. The Isc of the combination is limited to the Isc of the lowest cell.