Inverters are used to turn the direct current (DC) output of the solar modules into alternating current (AC). This current then flows in the breaker box to be either used in the house or transferred to the electrical grid.

Most appliances and loads within a home use AC current operating at 60 Hz in North America and 50 Hz in most of the rest of the world. Inverts function through entirely electronic processes or sometimes utilize a combination of electronic and mechanical properties, such as a switch.

A simple design consists of four transistors in an H-bride shown below. By closing and opening the transistors on both sides of the circuit the current can be made to flow in alternative direction to the load, M.

In larger photovoltaic plants many modules will feed into a single inverter to be converted. This is to reduce the overall cost of inverter system and to prevent transformation losses. Whenever current is transformed through an inverter a certain amount of electricity is lost due to resistance through the circuitry. Some of the larger industrial inverters have an efficiency around 95% compared to roughly 80% for home photovoltaic inverters. 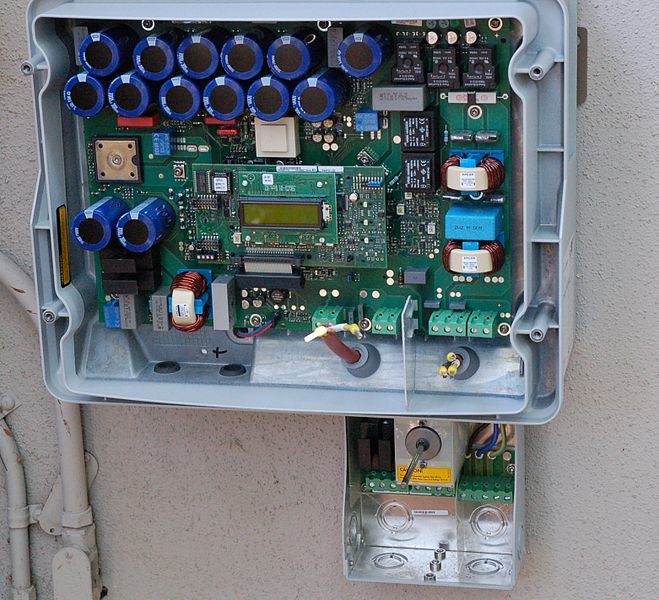 Inverters have to be designed to be able to withstand the maximum amount of voltage, current, and power that can be produced by the photovoltaic modules. When sizing inverters an engineering analysis needs to occur to meet the following requirements:

1) The maximum open circuit voltage of the system does not exceed the voltage requirements.

2) The minimum voltage requirement of the inverter will be met by the system to function correctly.

3) The maximum power output of the modules is less than the inverters rating.

4) The maximum current at the point of operation is less than the inverters rating.

The output current of the inverter resembles a sine wave with a frequency near the grid’s power requirements.  However, an inverter can only imitate a sine wave and the resultant output is a square wave. 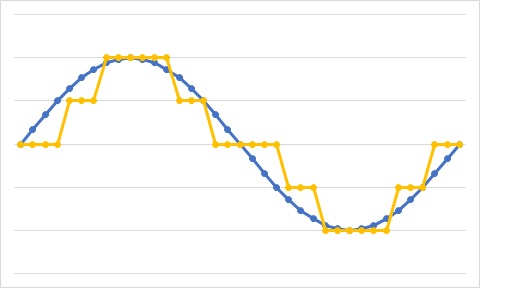 A maximum power point tracker (MPPT) allows the PV modules to operate at the maximum power point in the IV curve and is included as a part of most modern inverters. With varying levels of irradiance, cloud transients, changes in temperature, and wind levels solar cells output different currents and voltages all the time. An MPPT views the output of the PV modules and changes the resistance of the system to have the solar modules operate at max power.

Inverters tend to cost roughly 10-15% of the total cost of the PV system. Recent advancements in technology and an increasing market has driven the price of inverters down similar to the modules.

Inverters, depending on the make and output, tend to last 8-10 years and then have to be replaced. This cost needs to be accounted for during the initial economics of a solar system.

Recently, module manufacturers have been able to install micro-inverters on the back of modules. Rather than have one central inverter, each module’s output is converted to AC current before it is commingled with the other outputs. This allows for each module to operate at its maximum power and allows for less interrupted power if maintenance has to occur on the inverters. While, a system with a central inverter has to shut down the entire plant in order to work on the inverter, modules with micro-inverters can be replaced easily while allowing for the other modules to still output power.

Also, the life of micro-inverters has been shown to be longer than larger inverters but there are more expensive per watt and require more labor during installation. There is a design optimization that needs to occur when calling for the use of micro-inverter.

Micro-inverters can also be used as a data acquisition item. Each micro-inverter is generally equipped with wireless communication so the owner can examine the individual performance of the modules and take action on this data.